LIBOR (London Interbank Offered Rate) or ICE LIBOR (previously BBA LIBOR) is a benchmark rate that some of the world’s leading banks charge each other for short-term loans. It stands for Intercontinental Exchange London Interbank Offered Rate and serves as the first step to calculating interest rates on various loans throughout the world. LIBOR is administered by the ICE Benchmark Administration (IBA), and is based on five currencies: U.S. dollar (USD), Euro (EUR), pound sterling (GBP), Japanese yen (JPY) and Swiss franc (CHF), and serves seven different maturities: overnight, one week, and 1, 2, 3, 6 and 12 months. There are a total of 35 different LIBOR rates each business day. The most commonly quoted rate is the three-month U.S. dollar rate.

What is LIBOR used for?

How is LIBOR defined?

Libor is calculated by the Intercontinental Exchange (ICE) and published by Thomson Reuters. It is an index that measures the cost of funds to large global banks operating in London financial markets or with London-based counterparties. Each day, the BBA surveys a panel of banks (18 major global banks for the USD Libor), asking the question, “At what rate could you borrow funds, were you to do so by asking for and then accepting inter-bank offers in a reasonable market size just prior to 11 am?” The BBA throws out the highest 4 and lowest 4 responses, and averages the remaining middle 10, yielding a 23% trimmed mean. The average is reported at 11:30 am.

LIBOR is actually a set of indexes. There are separate LIBOR rates reported for 7 different maturities (length of time to repay a debt) for each of 5 currencies. The shortest maturity is overnight, the longest is one year. In the United States, many private contracts reference the three-month dollar LIBOR, which is the index resulting from asking the panel what rate they would pay to borrow dollars for three months.

What banks are the contributors to LIBOR?

How to build a chart you need

1. Specify the period of the filter above the history table 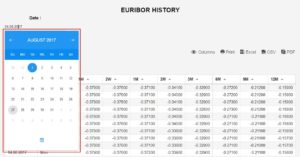 2. Choose ‘All‘ to show all filtered dates in the table and in the chart.

Disclaimer
This website has been created to provide you in a convenient way with interbank offered rates collected from publicly available sources. We use sources that we believe to be reliable. We take care to ensure that all data is accurate and up-to-date. However, mistakes cannot be ruled out. If you find any mistake please le us know via my.iborate@gmail.com.

Please confirm deletion. There is no undo!